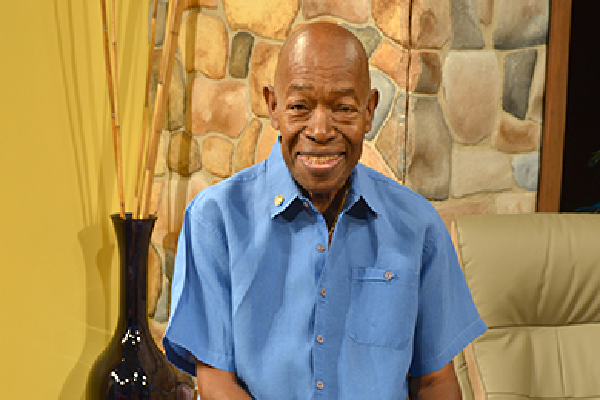 The University of the Virgin Islands (UVI) joins the Virgin Islands community in mourning the loss of Dr. Athniel C. “Addie” Ottley, legendary broadcaster whose voice was known and loved throughout the Caribbean and beyond. For more than fifty years, Ottley passionately served the VI community as a broadcaster, government leader and ambassador of goodwill. In recognition of his lifelong service to the community, UVI awarded Ottley an honorary doctorate degree in 2018.

“Dr. Ottley was a consummate Virgin Islands treasure, an icon, culture bearer, an avid supporter of the  University of the Virgin Islands, but for my part, I will miss my friend,” said UVI President Dr. David Hall.

“Addie welcomed me to the Virgin Islands through his voice, kindness and deep commitment to making the Virgin Islands a better place for everyone. I always felt at home in his presence. He had no agenda other than progress and love for all,” remembered Dr. Hall. “On behalf of the University, I offer my deepest condolences to his family. His passing has left an enormous hole in our hearts.”

From a very early age, Ottley showed an interest in communications. He built and operated his own ham radio station, becoming the first teenager to be granted such a license in the Virgin Islands. He attended the RCA Institute of Technology in New York majoring in electronics and subsequently attended Indiana Institute of Technology majoring in electronics and engineering. In 1965, Ottley returned to St. Thomas where he worked at WSTA and was later promoted to manager. During this period, he started his widely popular and respected radio program and extended his community involvement by hosting the weekly television series Face to Face produced by WTJX the Virgin Islands Public Broadcasting Station. Over the decades, Virgin Islanders relied on Ottley for the news of the day, spirited interviews, live Carnival parade commentary and critical information in times of crisis. In the aftermath of Hurricanes Hugo, Marilyn, Irma and Maria, people everywhere tuned into Ottley for help finding loved ones and neighbors, to seek medical attention, for important recovery updates and for reassurance and comfort.

Ottley had a long and distinguished record of public service in the Virgin Islands. He was elected to the Legislature in 1970 and 1972. In 1973, he was appointed Lieutenant Governor in the administration of the late Governor Melvin H. Evans and later served as public relations representative for the Department of Commerce expanding the VI tourism industry. In 1978, he was re-elected to a third term in the Legislature and thereafter was appointed executive assistant to the Commissioner of Commerce. In 1984, Ottley became President of Ottley Communications realizing his boyhood dream of owning a radio station. Along with a group of local investors, Ottley purchased WSTA, making it the first radio station owned by local stakeholders.

In addition to his professional interests, Ottley was actively involved in a wide spectrum of community projects and preserving Virgin Islands culture. He served on numerous boards, commissions, and civic organizations including Reichhold Center for the Arts, United Negro College Fund, Muscular Dystrophy Association annual telethon, Civilian Liaison Officer for the Virgin Islands National Guard, St. Thomas-St. John Chamber of Commerce, Phi Kappa Theta Fraternity, Mental Health Commission, Arts Alive and the Rotary Club of St. Thomas. A devout Catholic, Ottley successfully led the restoration effort for the Saints Peter and Paul Cathedral, a historic landmark originally commissioned by King Christian VII of Denmark in 1773.  For his efforts, Ottley received the special distinction of being knighted by Pope Francis to the Order of St. Gregory.

“Addie was the embodiment of the maxim ‘Service Above Self.’ The magnitude of how he used his talent and radio station platform to be a beacon of hope and a voice of reason for the Virgin Islands is the one that is most engendered in the hearts and souls of Virgin Islanders,” said Dr. Hall. “One of my most cherished moments was calling him on his morning radio show to inform him publicly that the Board of Trustees of the University had voted unanimously to bestow upon him an honorary doctorate degree. He would also be known as Dr. Addie Ottley.While his voice is now silent, we will cling to the memories of his jovial voice greeting us to begin a new day.”