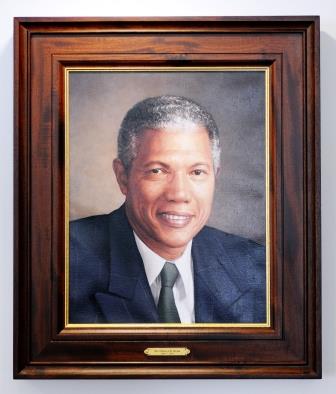 Dr. Orville E. Kean was inaugurated on March 16, 1990 as the third president.

Born on St. Thomas, he attended public schools and graduated valedictorian of Charlotte Amalie High School Class of 1955. He subsequently earned a bachelor of science in mathematics from Lincoln University (1959) and a master of science from the University of Michigan (1961). He began teaching at Charlotte Amalie High School soon after and worked briefly at the Virgin Islands Department of Social Welfare. At this point, though, he joined the College of Virgin Islands as a “part-time” faculty member in the Math and Science division – still teaching at the high school.  He then received a fellowship to attend the University of Pennsylvania for his Ph.D. in mathematical logic and category, and after completing his doctorate in 1971, he returned to the College, teaching full time. Henceforth, other than a two-year leave as Director of Policy Planning and Research at the Virgin Islands Department of Commerce, his career was exclusively at the College. He began as a mathematics professor, became vice-chair of the division, acting director of the Caribbean Institute, dean of Instruction, executive vice president, acting vice president for Academic Affairs – before assuming the presidency in 1990.

Under the innovative leadership of Dr. Kean, among other notable contributions, the William MacLean Marine Science Center and the Research and Extension Center were dedicated on the St. Thomas and St. Croix Campuses, respectively; the Caribbean Research Institute was integrated into the Eastern Caribbean Center; the University became a member institution in the Caribbean Council on Higher Education in Agriculture; the new Music Education Center and the Sports and Fitness Center on St. Thomas Campus and the residence halls on the St. Croix Campus were developed; the outreach efforts of the Small Business Development Center were enhanced by establishing satellite locations on St. Thomas, St. Croix and St. John; the University received a 5-year full re-certification of the Water Resources Research Institute by the U.S. Geological Survey.

It is important to note that Dr. Kean led both campuses in the arduous process of recovery from Hurricanes Hugo (1989) and Marilyn (1995) while improving and advancing the transformation of both the physical and institutional infrastructure, and set UVI on a course to become a leader in the economic development of the Virgin Islands and the Caribbean.